Dramatic coastal scenery, the unearthly Pinnacles, a quirky fishing village, fur seal colony, a lighthouse walk, Aorangi Forest Park and Maori heritage sites are all wrapped into one breathtaking coastal drive to the southernmost point of the North Island. You'll feel like you've reached the end of the world.

The drive from Lake Onoke to Cape Palliser offers many rewards for the visitor, with spectacular scenery and numerous attractions. The coast is also popular for surfcasting, diving and surfing.

Interesting geological formations can be seen on the journey, such as the Putangirua Pinnacles and the coastal Whatarangi Bluff. NGA-Ra-o-Kupe, or Kupe's Sails, are massive slabs of rock, resembling sails straining into the southerly winds of Cook Strait. They are named after the early Maori explorer Kupe. Traces of twelfth century stone walls along the coastal terraces around Te Hamenga Point hint at the extent of prehistoric settlement. These are some of the earliest Maori occupation sites recorded in New Zealand. Many ancestors of the Ngati Hinewaka people are buried along this coast, making this a very sacred place for Maori. Visitors are asked to treat the area with respect.

Erected in 1897, the Cape Palliser lighthouse provides a panoramic view from the top, up 252 steps.

A fur seal colony breeds at Cape Palliser, the only place in the North Island where breeding is well established. The seals, often with pups, are fascinating to watch, but visitors are advised to keep to the land site of the seals, allowing them unimpeded access to the sea. Dogs must be kept under control.

Ngawi fishing village is a popular base for commercial fishing operators with a beach lined with fishing boats and bulldozers, those who are keen to get out and do some fishing can arrange charter trips. It boasts a golf course grazed by sheep and is a challenging little nine-holer - which will test the most patient of players..

This wonderful little fishing village some 80kms south east of Featherston, comes to life in a very big way, once a year. In mid-February the Ngawi Fishing and Sports Club hosts the "Big 3" fishing contest. As the title suggests the contest is held over three days, with a fishing challenge for all types of anglers, from deep sea, sharks and tuna etc to surf casting, cod and Kahawai etc and the youngsters with line and rod. The hospitality is unsurpassed and the experience is not to be missed.

Some 13 years ago, the competition began among the members. It has now reached national status and is probably the most popular fishing contest in the North Island.

However Ngawi has a lot to offer than this annual event as both weekenders and holiday makers can spend many happy hours at this idyllic spot. Obviously fishing is the number one attraction, but  Charter trips, classic beach and bush walks and of course the Palliser Lighthouse with its 252 steps to reach the look-out, to enjoy the most beautiful of views.

The Putangirua Pinnacles are dramatic rock formations, creating an outlandish natural landscape. They have been carved into enormous organ pipe-shaped towers formed by rain washing silt and sand from the hard rock, leaving individual pinnacles exposed. This is a barren haunting environment with the atmosphere of a prehistoric time. Its unique geological topography was used in scenes in the 'Lord of the Rings' trilogy. A fascinating attraction for many visitors to the area.

Seven to nine million years ago, when the Aorangi Range was an island, screes poured gravels onto the coast, much as they do today. Exposed by the Putangirua Stream, this ancient layer of gravels has been eroded by rain and floods. The less resistant sediments have been worn away, leaving spectacular towering formations, or pinnacles, of cemented rocks or silts.

The Putangirua Pinnacles Scenic Reserve is 13km along Cape Palliser Road from the Lake Ferry turnoff, approximately one hour's drive from Featherston. The turn off and campsite are 500 meters past the Department of Conservation's Te Kopi Field Centre.

A sign at the car park gives details of short walks and access into the Aorangi (Haurangi) Forest Park and the Washpool Hut (4-5 hours tramp).

Three routes lead to the pinnacles. An easily graded bush walk starts approximately 10 minutes along the streambed from the car park, while a walk up the streambed to the base of the Pinnacles provides a dramatic close-up perspective. The more direct Loop Track runs from the stream junction up to the lookout. Allow 2-3 hours for the round trip. A longer 3-4 hour walk provides superb views of Cape Palliser and Lake Onoke.

Aorangi Forest Park, 19,373 ha, lies between Martinborough in the north and Cape Palliser in the south, covering a large part of the forest and scrub of the Aorangi mountains. The western side of the southern section of the park is the most popular, particularly for hunters, because of the ease of access by road and on foot, and the greater number of animals in the southern region. The five valleys that can be reached from Cape Palliser Road offer a wide scope for hunting deer, pigs and the occasional goat. The Tauanui River gives easy access to a large portion of the northern section of the park, main access to which is through the Pirinoa Station. Permission must be obtained from the landowner. The Tauanui Valley is completely forested with no open tops. Numerous routes can be taken for tramping, hunting or shorter trips up the valley. Legal access to other parts of the northern section is restricted

Lake Ferry is located on the shores of Lake Onoke and Palliser Bay. This popular tourist spot is known for its superb fishing and surfing, its unique environmental assets and its fascinating history. Lake Ferry- the southernmost tip of the North Island provides excellent fishing and whitebaiting when the conditions are right. The Lake Ferry Hotel offers delicious meals featuring fresh seafood and great hospitality. Lake Ferry has fabulous sea views and beautiful sunsets.

Settlement in Palliser Bay has been dated as early as the twelfth century. Archaeological research in 1969 identified an early people who practiced subsistence living on the coast, gardening, hunting birds and gathering seafood until about 1600. The Maori people who settled there later did so mainly around Lake Onoke and the adjoining lakes.

European settlers brought sheep and cattle into the area in 1844, following the coastal route from Wellington to Lake Onoke. These run holders were the first to establish pastoral farming in New Zealand.

Following a drowning in 1850, a ferry service across the lake was established. The ferryman needed accommodation and a supplement to his income so a liquor licence was issued and the Lake Ferry Hotel opened in 1851.

Today Lake Ferry is made up of holiday-home owners, permanent residents engaged in fishing, farming and service industries, people who commute to neighbouring towns and retirees. As in earlier times, when travelers found welcome respite from the elements at Lake Ferry Hotel, today's tourist enjoys the facilities offered at the hotel.

Lake Wairarapa is situated south of Featherston and forms the largest wetland complex in the southern half of the North Island. It is a large lake, more than 18km long and 6km across at its widest point, and has a surface area of approximately 7870ha. Normally the lake does not exceed 2.5m in depth. In the north and west the lake shore shelves quickly into deeper water, whereas the eastern shore consists of marshland and sand flats which are alternately flooded and exposed for distances up to 1km. Ponds and swampland lie adjacent to the northern and eastern shore. Eighty species of bird have been recorded from the lake's wetlands. Several species of fish including flounder, brown trout and eel are abundant.

Access to Lake Wairarapa for the general public is mainly at the Wairarapa Lake Domain on the northern shore and the scenic reserve on the western shore. Recreational finishing, picnicking, camping, yachting and power boating are largely confined to these areas. On the eastern shore and adjacent ponds the major activity occurs in May and June when over five hundred duck hunters visit the area. Numerous hides and maimais are scattered in the lake shallows and pond margins as a result of this pastime. Occurring in
the same areas is a limited amount of ornithological and botanical study. There is also horse riding on the late flats. 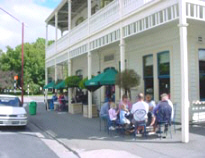 Just a few kilometers north is Martinborough founded by John Martin in 1881 near Wharekaka, New Zealand's first sheep station. He planned the streets in a Union Jack pattern, naming them after exotic destinations he had visited.
Martinborough has become a unique wine village with over 20 boutique vineyards, most within walking distance of the charming town square. To really learn what makes this tiny area so special for producing world-beating varietals and renowned Pinot Noir, you'll need to spend some time getting acquainted with the wine, dining and sunshine. Town Highlights are Boutique wineries and vineyards.  Superb dining. Historic town square. Exploring Martinborough's past on the Vintage Village Heritage Walk. Martinborough Wine Centre Wairarapa Growers Market (Sunday)